skip to main | skip to sidebar

Give way to buses scheme is dangerous and disingenuous

Give way to buses scheme is dangerous and disingenuous (Ver5.1; 31Dec09):
The conception behind this new policy is not only contradictory, it's also extremely dangerous and quite unenforceable as I shall describe:
- The LTA concept: see 1st large heading at 'How the Scheme Works')-
“The Mandatory Give-Way to Buses Scheme is similar conceptually to a zebra crossing, except that it is meant for buses.
When nearing a bus stop under this scheme, motorists will first see triangular give way markings on the road. These markings indicate that motorists approaching these bus stops need to slow down and watch in case buses are pulling out of the bus bay. Motorists come to a complete stop before the give way line and give way to buses exiting the bus bay at the location. Motorists may continue their journey once the bus has successfully exited the bus bay and no other buses are pulling out from the bus bay.
It will be a traffic offence if motorists do not give way to buses exiting from bus bays where the new road markings are drawn. The penalty for each offence is a fine of $130 (no demerit points).

”http://www.onemotoring.com.sg/publish/onemotoring/en/on_the_roads/traffic_management/mandatory_give_way.html
- The give way to buses scheme is likely to contravene the Geneva Convention on Road Traffic [1949] (GCRT1949)http://en.wikipedia.org/wiki/Vienna_Convention_on_Road_Traffic which Singapore is signatory to, (and by which agreement are international driving permits issued and recognized in Singapore).

1.Severe Legal contradiction(s):
Of Article 12 (GCRT1949) are described as follows,
- Para 2 states: “Priority of passage may be accorded at intersections on certain roads or sections of road. Such priority shall be marked by signs and every driver approaching such a road or section of road shall be bound to yield the right of way to drivers traveling along it.”
- Para 4(a) states: "Every driver before starting to turn into a road shall: (a) make sure that he can do so without danger to other road users;"... ( http://en.wikisource.org/wiki/Geneva_Convention_on_Road_Traffic )
- I believe that bus bays/ exit are certainly better described as a 'side road' and definitely not 'road intersection', so para 4(a) should logically take precedence, and so any vehicle exiting the bus lane should thus give way to the main road traffic. (Para 2 can only be relevant in this context to the legitimization of bus lanes/ bays so that only 'privileged vehicles' would have right of passage for priority use of roads by public/ emergency vehicles and incidentally, cyclist in single file ).
The result of this legal contradiction can only be more conflict and confusion amongst road users as the new law contradicts the existing international agreement. Such contradictory rulings would make any such conflict unresolvable in any esteemed court of law, leading to the embarrassment of policy makers in Singapore.


2. Compromised efficacy
By its own admission, LTA has admitted the new rule to be less efficacious then the existing bus lane scheme by up to 5% (7% vs 12%) in terms of total travel time reductions. (http://www.onemotoring.com.sg/publish/onemotoring/en/on_the_roads/traffic_management/mandatory_give_way.html cf
http://www.onemotoring.com.sg/publish/onemotoring/en/on_the_roads/traffic_management/full_day_bus_lanes.html )

3. Practical/ other legal issues and controversies.
a) Bicycling is established as an efficient, economical, healthy, clean and sustainable means of personal transportation/ recreation. Its invention preceding that of all motorized transportation, its value to society historically etched. However, due to their slower pace, such mode of transportation has since been relegated to the left most lane on Singapore roads. This new rule is 'regressive', in the sense that a healthier and more sustainable mode of transportation has now to compromise for another one less so; not to mention the fact that with the new law, cycling has become more unhealthy because of the intense fumes they receive whilst they give way to buses accelerating out of the bus bays. Why have the environmentally citizens been penalized, just so that bus commuters can be happier? The new law is surely a jaundiced proposition.
b) The existing bus lanes serve an intangible dual purpose. Hasn't anyone noticed how police and ambulances on emergency missions have benefited from the clear thoroughfare as a result of bus lanes being free flowing? Emergency vehicles need their well prioritized use of roads for the conduct of their essential emergency services.
(cyclist incidentally end up getting 'priority', partly as a compromise on part of the government for the lack of planning for dedicated cycle lanes, the compromise being that they use the roads, but in single file http://forums.asiaone.com/showthread.php?t=25939&page=6 ). I can imagine police and ambulances getting stuck in jams just because some wise crack at LTA decided that this was a quick, cheap way of 'solving a problem', a stop gap measure I guess.
c) Since LTA doesn't specify the definition of 'motorist approaching' nor grant easy access to any legislature that does, the lack of specific provisions would thus thus imply that all other 'motorist' (includes ambulances/ other buses etc) become legally compelled to 'give way' to buses. [The rule of 'Failing to give way to ambulance or fire brigade or police vehicle'(which is and offense yielding 4 demerit points according to the DIPS):( http://driving-in-singapore.spf.gov.sg/services/Driving_in_Singapore/Information/dips/offences.htm ) unfortunately remains non-directive since my observation is that it often applies to motorist having 'equal right of way', such as vehicles obstructing an ambulance along an expressway. At side roads, ambulances are legally obliged like all others (unless otherwise arranged) to give way to traffic with right of way according to the highway code]. These new rules thus compromise the priority given to emergency vehicles going using main roads, by narrowly giving priority to buses in bays. Given this unfavorable consequence, the new rule is ill-conceived.
d) As a continuation of the above point, another bus going straight would have to give way to a bus exiting the bay I cannot therefore understand how buses slowing down to give way to another would ultimately save time. If any, such repetitive start-stop driving, 24hrs a day, by all would be no less a constant waste of fuel and tyre rubber, detrimental to road surfaces (heaviest vehicles use the left lane), and not to mention an increase in driver fatigue. Surely there are better ways to regulate road traffic?
e) Public buses leaving bays are fraught with interruptions in departure. Passengers may suddenly request boarding/ alighting at last minute/ as the driver a question. Bus lanes are thus a must where roads are often congested to ensure a safe, clear and easy bus passages.
Going by 'How the scheme works' buses have been given an exceptionally great amount of right (beyond convention). It is now the onus of all approaching motorist to avoid buses 'pulling out'. No legal argument can now be made against non signaling buses, because being in a position of 'right of way', there then remains no necessity to. Remember, unlike cyclist and pedestrians at zebra crossings, buses certainly have faster acceleration, their haste to keep timings and contrary rulings will ultimately result in either more accidents of extremely slow moving left lanes as all motorist pass in fear. I cannot imagine the untold stress this new rule must be causing to all road users.
f) Likewise compounding the already unconventional and contradictory nature of the new rule, is its unnecessary operation for 24 hours a day. Poor night visibility, foreign and unfamiliar drivers would mean new roads hazards for all commuters.
Also, a 'broken down'/ stationary bus jutting slightly out of the bay in without break down signage would mean constant confusion, as all traffic has to stop only to discover a bus a bus stationary due to breakdown.
4. Difficult enforceability. 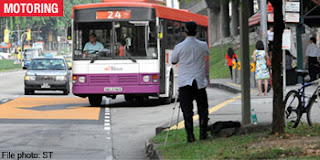 Compared to existing bus lane rules, where penalties for trespass are easily enforceable via photographic evidence form bus mounted/ stationary warden photographic shots, requiring only time stamp and the offending vehicle to be seen occupying the restricted carriageway, the same cannot be said for the new scheme as the fact of 'buses leaving' can be a subjective one. Besides the new law being oddly toothless in terms of not having demerit point provisions, the inadequacy of photographic evidence to contesting motorist, public outrage against rogue bus drivers, rule ambiguities make for a very unpleasant experiences for both the inventors and the enforcers of this new and novel concept.
5. Conclusion:
The existing traffic regulations (controlled/ uncontrolled junctions/ pedestrian crossings, ERP gantries, yellow box markings) alone or in tandem with bus lanes (which have other intangible benefits) adequately serve the purposes of expediting public and emergency transportation well. LTA in its current attempt at setting new laws is at best a lame reinvention of the wheel, at worst, a disaster waiting to unravel.
LTA has shown obvious conceit in its haste to declare the trial a success (29April09) (: http://app.lta.gov.sg/corp_press_content.asp?start=2118 ) , high- handed and cursory; the main parties surveyed seems to only include '200 commuters' and 'public transport operators' (which are almost all public listed companies). I doubt LTA consulted the traffic police departments, cyclist's associations, emergency vehicle and truck/ private bus drivers unions and motor insurers nor the judiciary adequately before implementing these laws.
It's hazards out weighing its intent, this disingenuous 'give way to buses' scheme must quickly be suspended lest more public resources be spent rectifying the social and economic damage that it has caused.
References:
- How the scheme works (3Jjuly09): http://www.onemotoring.com.sg/publish/onemotoring/en/on_the_roads/traffic_management/mandatory_give_way.html#MainPar_0007
- Existing bus lane rules and timings: http://www.onemotoring.com.sg/publish/onemotoring/en/on_the_roads/traffic_management/full_day_bus_lanes.html#MainPar_0062
- ST forum 1 Jan2009: Safety aspect in new rule on bus bays: http://forums.asiaone.com/showthread.php?t=26228
- STOMP 29Aug09: “I gave way to bus -- and got rammed from behind”, http://singaporeseen.stomp.com.sg/stomp/sgseen/this_urban_jungle/236430/i_gave_way_to_bus__and_got_rammed_from_behind.html
- STOMP 19Aug09: “I am one of many 'victims' unfairly fined $130 under new 'give way to bus' rule”,  http://singaporeseen.stomp.com.sg/stomp/sgseen/what_bugs_me/107792/unfairly_fined_130_under_new_give_way_to_bus_rule.html
- Ver.1.0 (this article) posted to REACH web site on 22.8.09. http://app.reach.gov.sg/reach/YourSay/YourDiscussionCorner/tabid/117/ptid/414/threadid/2541/forumtype/posts/Default.aspx
- A1motoring, 22Dec09: Give way to buses at 15 more bus bays: http://motoring.asiaone.com/Motoring/News/Story/A1Story20091222-187483.html
- Pict illustration:
http://www.straitstimes.com/STI/STIMEDIA/image/20090429/SPORE-BUSscheme.jpg
- warden on duty:
http://motoring.asiaone.com/A1MEDIA/motoring/20090617.173828_busbayfinal.jpg
- Reason why feedback article is NOT on LTA forum site: 'Full name and NRIC are required' there: https://www.onemotoring.com.sg/publish/onemotoring/en/members_area/membership/register.html

AsiaOne
From Dec 25, the Mandatory Give Way to Buses Scheme will be extended to 15 more bus bays.
They will occur along Pasir Ris Street 1, Canberra Road and Woodlands Avenue 5. With this extension, the scheme will now be implemented at 41 bus-bays island wide.
A spokesperson for the Land Transport Authority (LTA) said the extension is in line with objectives to speed up bus travel.
Results from the earlier pilot scheme have shown improved overall bus speeds. The scheme was effective in reducing the amount of time buses spend trying to exit from bus bays.
Buses are now able to exit the bus bays faster with a time reduction of up to 73% in some cases. Bus journey times have also improved by up to 7%.
The LTA will continue to review and identify more suitable locations so that the scheme can be extended to more locations to benefit more commuters.
Prior to implementation, signs will be put up along affected locations to remind motorists they need to give way to buses exiting bus bays.
It is a traffic offence if motorists do not give way to buses exiting from bus bays where the road markings are drawn or if they stay in the yellow box marked "Give Way to Buses". The penalty for each offence is a fine of $130.
a1motor@sph.com.sg
http://motoring.asiaone.com/Motoring/News/Story/A1Story20091222-187483.html
Posted by bic_cherry at 3:18 AM

bic_cherry
A Singaporean deeply afraid that PAP CEOs might one day sell off our country when its returns dwindle. ... Have that eekie feeling tt PAP acronym truely means Pleasure and Plenty through Plunder and Profit, pls reassure me. ======================= Author is no political analyst nor lawyer, the opinions stated in this blog his own.